Who will win the 2013 Management Undergraduate of the Year Award?

The success that Enterprise had at the TARGETjobs Awards was down to creating a brand in the undergraduate market which attracts students who want great management training, early responsibility and a dynamic working environment. And I don’t think they would have won the second award if they hadn’t put in the hard yards to win the diversity award.

For most of us it’s music that maps our lives. We all have our Desert Island Discs self-consciously stored away in case Kirsty Young ever comes calling. The little tunes that mean so much. The songs that chart an epic journey from birth to the current day.

For others it’s taste. Marcel Proust nibbled on a Madeleine and, suitably inspired, went on to pen the longest and most tedious novel ever written. Heaven knows what he would have churned out if he’s popped into Greggs for a jam doughnut. ‘À la recherche du temps perdu’ might have been an altogether fluffier concoction. Sadly, at the time in question, Greggs had not yet opened a shop in Cabourg.

For me it’s always been smells. The early smell of Mum (of course); liniment in a school changing room; Pernod for twenty years after a mindless New Year’s Party; Chanel No.19 on my wife’s neck (she’s just started reading the blog); the sweating crowd in the 91st minute of the game against QPR. And, right up there in the pantheon of remembered whiffs, the smell of Chinese rabbits in a pet food factory in Melton Mowbray. À la recherche du odeurs perdu.

I was a young careers adviser on a works outing to Pedigree Petfoods, part of Mars but recruiting then as a separate company. Despite operating in, how can I put this nicely, one of the less glamorous corners of the FMCG sector, they had a national reputation for the quality of their management training programme. But the factory smelt exactly like you’d imagine when you’re importing frozen rabbits from the Far East, defrosting them and turning them into Pedigree Chum. Chanel No.19 it wasn’t. But it stuck with me, that smell and the compelling fact that you don’t have to have a sexy product to be a sexy recruiter.

Take car hire. If I was to tell you that a car hire company was crowned Graduate Employer of the Year at last night’s TARGETjobs National Graduate Recruitment Awards, you would be surprised. When I tell you that the same company received an award for excellence in diversity recruitment, you’d be as shocked as I was, all those years ago, to stand in olfactory hell talking to graduates about how pleased they were to join the UK’s top management training programme.

This car hire company is called Enterprise Rent-A-Car and I would paint a glamorous picture of the work they do if I could. But I can’t. 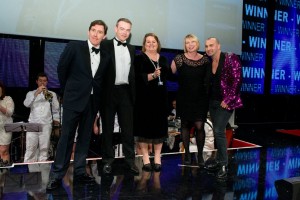 The success they had at the TARGETjobs Awards was down to creating a brand in the undergraduate market which attracts students who want great management training, early responsibility and a dynamic working environment. And I don’t think they would have won the second award if they hadn’t put in the hard yards to win the diversity award.

All employers claim to be focused on diversity but some go on to implement ferociously un-diverse recruiting campaigns that target only Russell Group campuses. Diversity here means they’ll take anyone as long as they have good UCAS points, a 2.1 and don’t come from Thames Valley University. Sort of Diverse Lite.

Enterprise is properly diverse. They recruit from anywhere and don’t have cut-offs based on degree subject or class. The message they work so hard to convey (and they do work hard as walking this particular walk takes you down untrodden paths) is that they will decide who best suits the company by taking a good look at everyone who applies.

This approach results naturally in the recruitment of a diverse workforce, more representative of the areas of the country they operate in. In other words, when other recruiters aspire to diversity while obsessively targeting the same small bunch of universities, companies like Enterprise (and others of course) take the simple step of being open to all. It’s not that complicated really. And this is why I was so pleased they won the Diversity Award last night. They left quite early, before the serious drinking began, but even though I know that they were chuffed to bits, I also know that they start work really early in the morning.

So it’s nice that they experienced the sweet smell of success at the ninth TARGETjobs Awards. I will joyously add this distinctive scent to my own memory bank alongside rabbits, Pernod and (I hope she’s read this far) my dear wife’s neck.

Chris Phillips is Information and Research Director at GTI Media, the parent company of TARGETjobs.

This post first appeared on Chris Phillips’ own blog and is reproduced here by kind permission.