Who will win the 2013 Management Undergraduate of the Year Award? 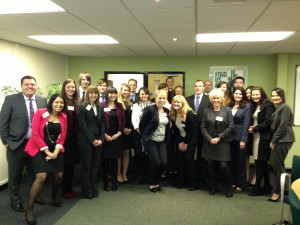 For the third consecutive year we are proud to be sponsoring the Management Undergraduate of the Year Award at the annual Target Undergraduate Awards.

The winner will not only hold the title of 2013 Business Management Undergraduate of the year, but will also win a 10 week placement in the UK and a week in one of our branches in the USA.

As with previous years the competition was fierce, with several hundred applicants going through a tough and rigorous application process. Part of that process were two assessment centres in London and Birmingham, from which ten final nominees were selected to attend the final ceremony on April 19 in London’s Canary Wharf.

We are proud to announce that this year’s hopeful nominees are:

Last year’s 2012 Business Management Undergraduate of the year was awarded to Grace Gimson from Birmingham University. At the time she said: ”I’m so thrilled to have won, the calibre was really high. I’m very much looking forward to the placement and a week in the USA with Enterprise, and I feel like this will open a number of new doors for me. Great experience all round!”

Make sure you stay tuned on Twitter and Facebook to see who the lucky 2013 Management Undergraduate will be and good luck to all the hardworking nominees.

Don’t forget we have a range of graduate jobs and summer and year-long internships available.