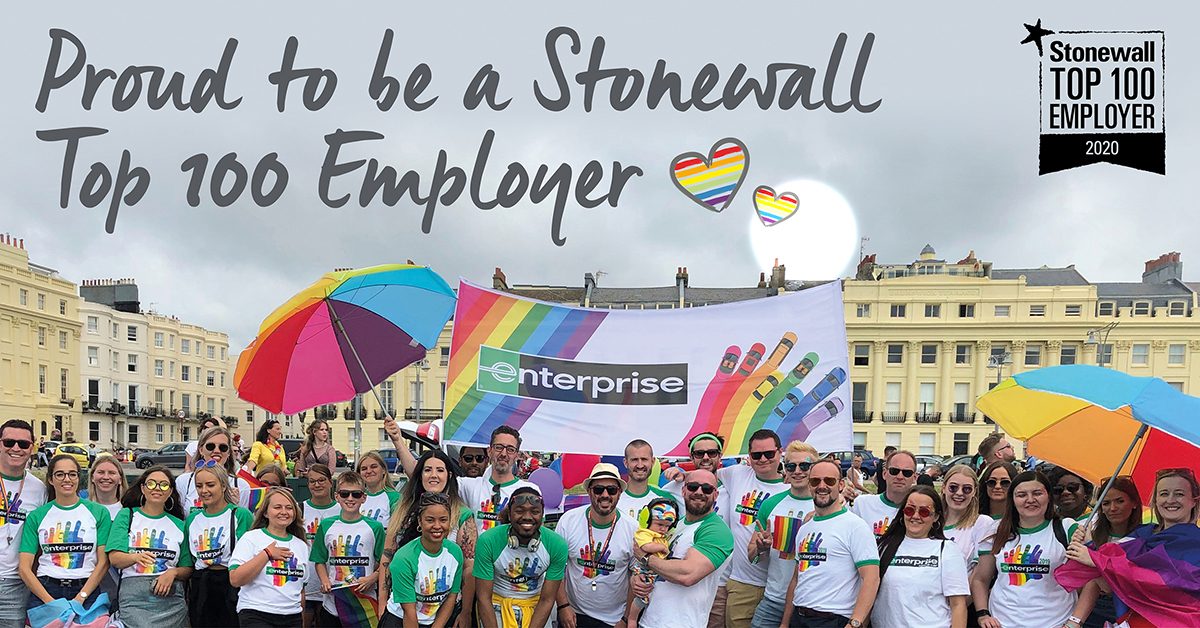 Enterprise has been named one of the most inclusive employers in Britain by lesbian, gay, bi and trans equality charity Stonewall in its Top 100 Employers list for 2020. Enterprise has placed 76th on this year’s list.

This year’s Top 100 was the largest ever with 503 employers entering, demonstrating their commitment to LGBT workplace inclusion.

As part of the Top 100, Stonewall collects more than 109,000 anonymous responses from employees on their experience of Britain’s workplace culture and diversity. This year, 81 per cent of LGBT employees who responded to the survey said they feel able to be themselves in the workplace.

Ashley Hever, Talent Acquisition Director for Enterprise Rent-A-Car UK & Ireland, said: “Being named as a Stonewall Top 100 employer is incredibly important to our people. We feel especially proud that we achieved this during Enterprise UK’s 25th anniversary year. We’ve worked hard to foster an inclusive culture that promotes LGBT+ equality and this recognition is a testament that our inclusion policies and initiatives are impactful.”

Stonewall’s 2018 Work Report revealed more than a third of LGBT staff (35 per cent) have hidden they are LGBT at work and almost one in five LGBT employees (18 per cent) have been the target of negative comments from colleagues because of their identity.

Sanjay Sood-Smith, Stonewall’s Executive Director of Workplace & Community Programmes, said: ‘We are delighted to name Enterprise as one of our Top 100 Employers this year. All the organisations in this year’s Top 100 Employer’s list are playing a huge role in improving the lives of LGBT people and should be very proud of their work.

‘We still don’t live in a world where everyone is able to be themselves in the workplace, as we know more than a third of LGBT staff (35 per cent) hide who they are at work. By taking steps to make their workplaces supportive and welcoming of all lesbian, gay, bi and trans people, businesses like Enterprise are bringing us closer to a world where everyone is accepted without exception.’

Stonewall’s Top 100 is compiled from submissions to the Workplace Equality Index, a powerful benchmarking tool used by employers to assess their achievements and progress on LGBT equality in the workplace, as well as their wider work in the community and on service provision.

Each organisation must demonstrate their expertise in 10 areas of employment policy and practice, including networking groups, senior leadership, procurement and how well they’ve engaged with LGBT communities.

Want to join a company that has made a true commitment to providing an open and inclusive working environment, where everyone can be their best? Search for our latest graduate jobs and internship opportunities in your area and see where your career could take you.